SHAHEEN Modern and Contemporary Art is delighted to announce an exhibition of recent work by Miami based artist Beatriz Monteavaro.  This will be Monteavaro's first one person exhibition in the Midwest.  There will be an opening reception for the artist on Thursday, March 16th from 5:00 - 8:00 p.m.  The exhibition will continue through April 28th.

Since 2003, the whole of Beatriz Monteavaro's production - which centers around drawing / working on paper - has derived from a friend's offhand suggestion that she construct a spaceship for 1980's pop music star Adam Ant, so that he might escape the twenty years of personal and legal turmoil that have plagued him since the apex of his stardom.  Leveraging this premise as a jumping off point, Monteavaro has concocted an episodic, and increasingly intricate narrative yarn spun from bits and pieces of pop and punk music, film, art history, popular culture and personal history.  The seemingly mismatched cast of heroes and villains that constitute Monteavaro's cosmology has grown to include Adam Ant, electro-pop music pioneer Gary Numan, Pablo Picasso, Bella Lugosi, and Siouxie Sue of famed punk band Siouxsie and the Banshees.  As the artist's narrative has developed and evolved, taking on a life and internal logic of its own, the action has shifted from Earth, to a strange "Planet of the Apes" - like planet, to Paris and the Cathedral of Notre Dame.  Monteavaro's exhibition at SHAHEEN will depict the latest chapter in this developing saga.  More importantly, it will mark the entrance of 1980's pop music phenom the Go Go's into the narrative.  As Ant, Lugosi, Picasso and Numan fight for their lives in Paris ( -- against an army of zombies, of course), the GoGo's  set out ( - on water skis  .... as they appeared in the video for "Vacation") on a perilous journey to join them and, perhaps, to save the day.....  Monteavaro's beautifully executed works on paper and the labor-intensive, heavily layered cross-hatch drawing technique that dominates them echoes the flavor of childhood obsession and imagination that pervade her narrative.

Over the past four years Beatriz Monteavaro's work has appeared in numerous solo and group exhibitions at galleries and museums in the United States, Europe and Latin America.  Her first one person gallery exhibition in New York will open at Derek Eller Gallery later in the year. 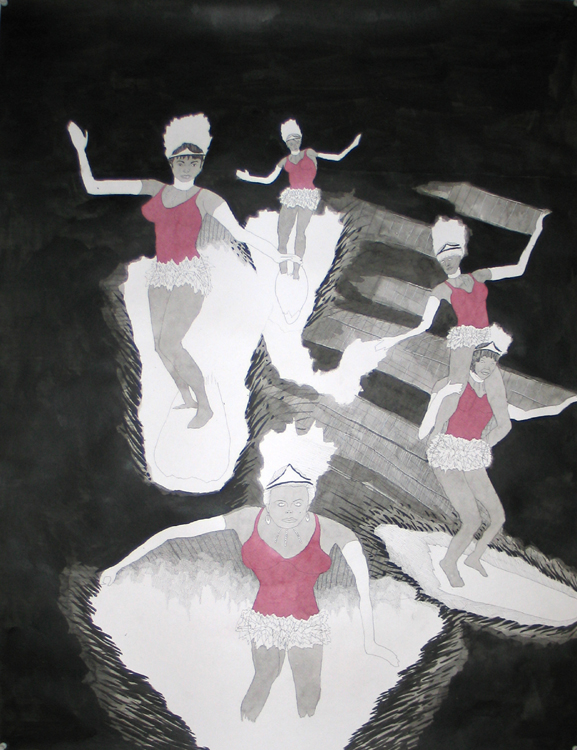 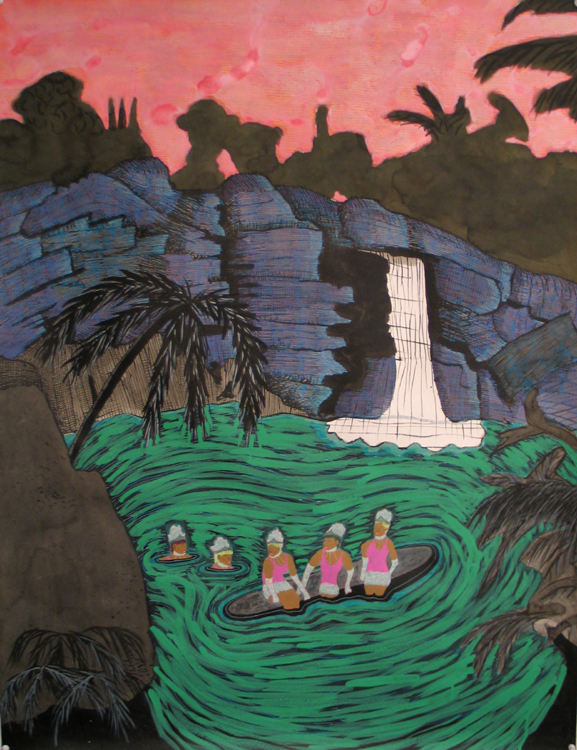 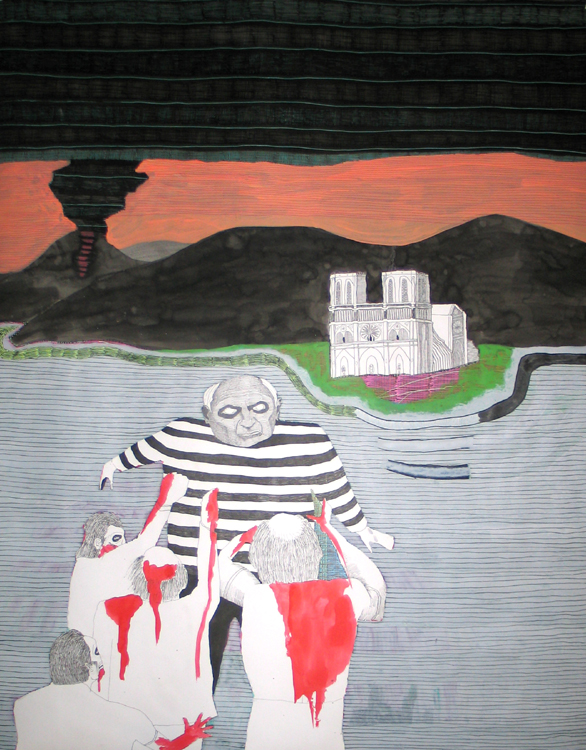 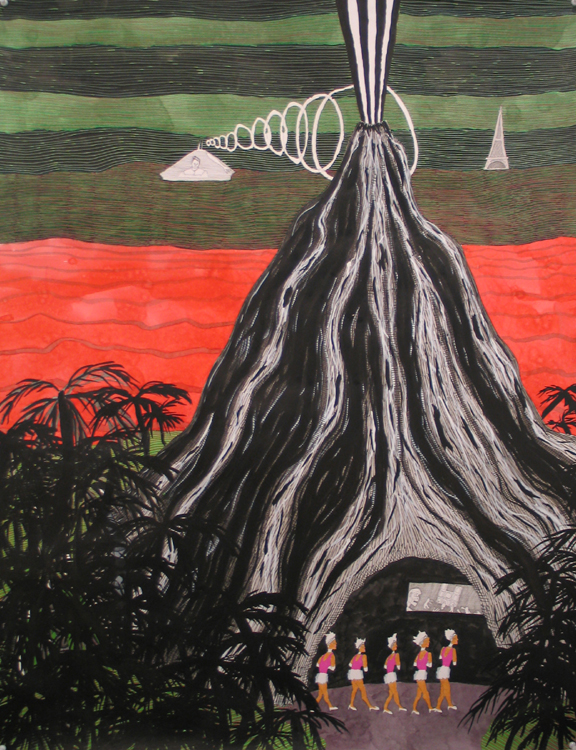 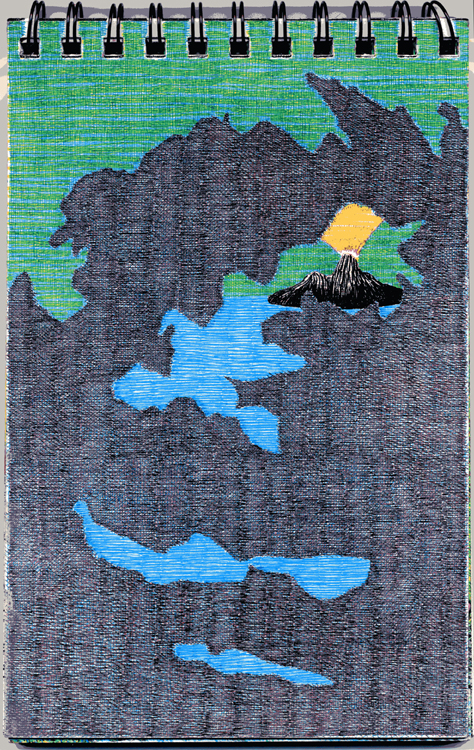 Beatriz Monteavaro
Nothing Better Could Happen to You Yeah, 2005
Ink, acrylic and gel-pen on paper
82 x 102 inches

Beatriz Monteavaro
The Ant and the Scratching Hand, 2006
Ink on paper
12 x 9 inches

Beatriz Monteavaro
Up From the Depths, 2006
ink and gel pen on paper
9 x 6 inches

Beatriz Monteavaro
I Wanna Be Worlds Away, 2006
Ink and gel pen on paper
9 x 6 inches 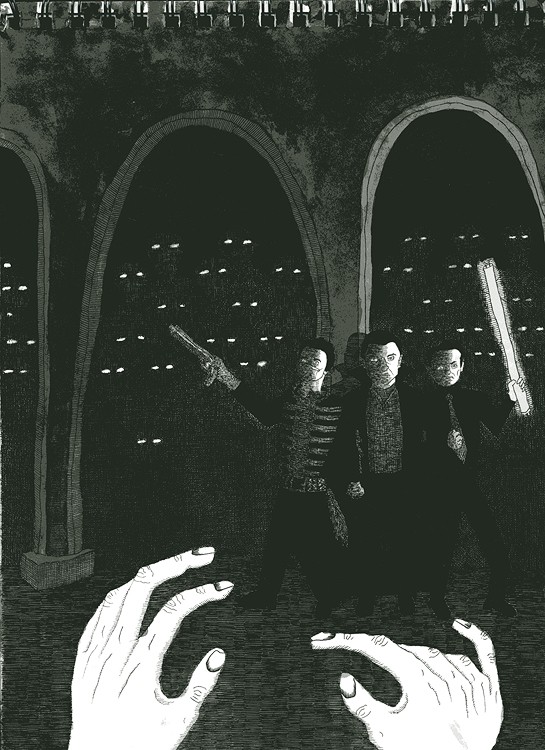